In information security and programming, a buffer overflow is an anomaly where a program, while writing data to a buffer, overruns the buffer's boundary and overwrites adjacent memory locations. Buffers are areas of memory set aside to hold data, often while moving it from one section of a program to another, or between programs. If one assumes all inputs will be smaller than a certain size and the buffer is created to be that size, then an anomalous transaction that produces more data could cause it to write past the end of the buffer.

This article is the first of a series dedicated to binary exploitation which is also more commonly known as "pwn". You are most likely wondering what this means? Commonly it's the art of exploiting vulnerabilities linked to a misuse of a language like for example "C" or "C++". You will certainly hear people putting forward that the term "pwn" can be used for any exploitation of a flaw linked to a bad use of any language like code injections or anything else but we will stay on the first definition for the moment.

One of the most well-known vulnerabilities related to the misuse of a programming language is the buffer overflow. Today we will together try to understand the basics of this vulnerability.

LET'S START BY THE BEGINNING

When you develop a program in a language such as "C" or "C++" and compile it with gcc using the command:

Do you know how gcc does to transform your code from "C" to computer-executable machine language? To make it short, we can say that the process is done in 3 steps:

Now let's see the basics of assembler since this language is essential to understand the process of exploitation.

There is nothing to worry about if you don't understand! The purpose of the above piece of code was just to show you how it looks like. As you can see the code is made with instructions such as push, mov, cmp, and much more.

As you can see is not complicated. Now, what is eax or ebx? These are what we call registers. In another way, we can say a sort of block where we store some values such as an address, number, etc ... For a 32 bit processor the registers eax, ebx, ecx, edx, ebp, esp, eip, and edi have a size of 8 bits. There are other registers but to be honest they are out of any interest for us for the moment. One more thing, for a 64 bits processor, we will use the same registers, except that they will be 16 bits instead of 8 bits and the "e" will be replaced by "r", so the registers name will become rax, rbx, rcx, rdx, rbp, rsp, rip and rdi.

Let's see some technical points and what does each of these registers contain?

Being on the exploitation of Linux systems we will rather be interested in the different segments of an ELF binary (Executable Linkable Format) which is an executable file under Linux. Let's move on another approach using a small schema:

I'm sure that the first question crossing your mind is "Nice but what all of this mean?". Well, it's simple, it's just our segments, let's see what each contains!

It may not be clear enough, so let's take a little piece of code to illustrate this:

In the above example we can see the following:

Important: The variable include and define are part of what we call preprocessor when our code is compiled these parts will be removed automatically. Let's take a closer look to allow us to see how to disassemble a program:

No we will make a test by compiling the above small piece of code. First of all, open your terminal and simply use the following commands one by one:

Now that we compiled our file, we will decompile it using objdump which is a linear disassembling tool present in most modern GNU/Linux distribution.

Do you remember what we saw above about rbp? If you already forgot, I kindly suggest you go back to the top! So let's continue and check together what exactly our program does.

As you can see there is no define variable. We can even say there is no variable name either but ultimately we do have 15 in rbp and it's exactly what we wanted no?

We will try to make this more clear just to be sure that you got it. Let's take this little piece of code:

From the above output, we will take a look at the size of each session. So far you can see the size of the column referenced bss has a value of "8".

Now let's see what happens if we modify a little bit of our code by adding a new variable.

As you can see bss went from 8 bytes to 12 bytes we can basically and easily consider that our global variable is stored into bss since his value did increase.

Now we will make another test by including a static variable into our main function and see what happens.

As you can see the variable was not stored in bss like in the previous example but in data which went from 512 bytes to 516 bytes. That looks very interesting no?

We will make a final test to see what could happen if we initialize a global variable.

We got the same result and do you know why? A global variable, if it is initialized, will be put in data. I think we developed enough about this point for you to understand where and how the variables are stored.

HOW DOES MEMORY WORK?

Here we will not talk about your physical memory but rather RAM and how is it managed by your operating system. A process that runs on a machine requires memory, and in a computer, the amount of memory is limited.

Processes must, therefore, go looking for available memory to be able to work. Let's say several processes are running at the same time. What would happen if two processes wanted to access the same memory area? And if ever a process wrote in a memory area, then another process overwrites this same memory area with its data, then the first process will think of finding its data, but it will find the data of the second process. This could be a very big problem no?

This is where a major feature of your operating system comes to provide a solution to this issue, by allocating to each process a range of virtual memory which is limited to 4GB on 32-bit systems and 8 on 64-bit systems.

Each process will be able to use the memory addresses it needs without worrying about the other processes, the kernel of the operating system will manage to link virtual memory and real memory.

THE STACK AND THE HEAP

We will now move on to something very important. The heap can be manipulated by the programmer. This is the part of the memory in which the dynamically allocated memory areas malloc() or calloc() is written.

This memory area does not have a fixed size. It increases and decreases according to what we ask, we can reserve or delete blocks via allocation or release algorithms for future use. The larger the heap size, the larger the memory addresses, and the closer they are to the memory addresses in the stack. The size of the variables in the heap is not limited except the physical memory limit, unlike the stack.

Variables stored in the heap are accessible everywhere in the program with pointers. The stack also has a variable size, but the more its size increases, the more the memory addresses decrease, approaching the top of the heap. The stack grows down. This is where we find the local variables of the functions.

The stack frame of a function is a memory area in the stack in which all the information necessary for calling this function is stored. There are also local variables for the function.

DEEPEN THE CONCEPT OF STACK

Let's start with LIFO, which doesn't represent anything complicated since we already see it a bit previously. LIFO stands for Last In, First Out. That is to say that the last thing put on the stack is the first that we will release, we saw it in particular through pop and push.

Actually no, it isn't totally like this. rax stays at the same address except that rsp now points to a lower address.

Finally, we come to the exploitation part. Let's take a small piece of code like the below one.

The code looks completely normal, you must have used the scanf function in your learning of the "C" language. But what if we look at what the stack looks like in this example.

You may be wondering what is saved ebp and saved eip? Well, we don't care about "saved ebp", what interests us is "saved eip". Do you remember what eip contains? The address of the next instruction to execute. And if we change this address we could run anything!

But how do you change this value? Well, it's very simple! You see scanf does not check the number of characters it receives! Let's take a piece of code to make it more clear.

If during the execution of scanf we give a too large value, for example, several "A" this will cause a buffer overflow. The program will, therefore, return a segmentation fault to us. But if we changed the "A" value by a valid address we could jump anywhere or in particular on the adminfunction(). It's done for the theoretical part. We will see the practice in the next article.

For more information on how this script works, I encourage you to watch the video below. 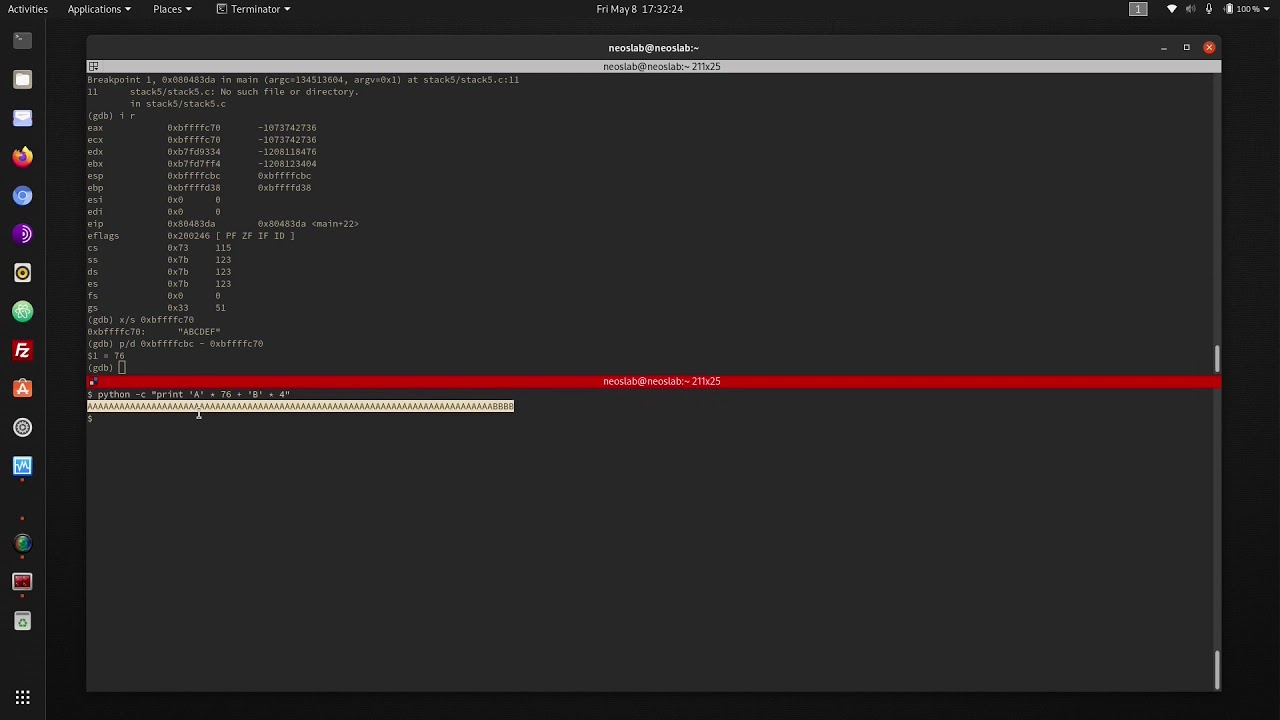 In cryptanalysis and computer security, the term password cracking is [...]

How to Evade AntiVirus and Inject your Payload during an Attack

We already have discussed several time about the the notion of discretion or even anti-virus evasion. It is of course an essential component of the Ethical [...]

The Pass-The-Hash technique is an essential foundation of lateral movement on Windows. It allows you to assign the rights associated with a user based solely [...]

How to Bypass a Firewall Exploiting a SSRF Security Vulnerability

Server Side Request Forgery also called SSRF, are web vulnerabilities that allow files to be read on the local server. They should not be confused with CSRF's, [...]

The Best Websites Available in the Deepweb Network

Beyond the Internet layer that we use every day, through common queries and search engines, there is the Deep Web. This part of the web, allows us to find all [...]

The Products and Services Offered by Cybercriminals in the Darkweb

Hacking services, botnet rental, DDoS attacks, banking data information, as well as the sale of exploits, servers, and other private information, are some of [...]

How to use DNS Poisoning to Redirect Users to Fake Website

DNS poisoning, also referred to as DNS cache spoofing, is a form of computer security hacking in which corrupt Domain Name System data is introduced into the [...]

In networking and reconnaissance, a ping sweep is a network scanning method that can establish a range of IP addresses that map to live hosts. The most used [...]

Enumeration belongs to the first phase of Ethical Hacking. This is a process where the attacker establishes an active connection with the victim and tries to [...]